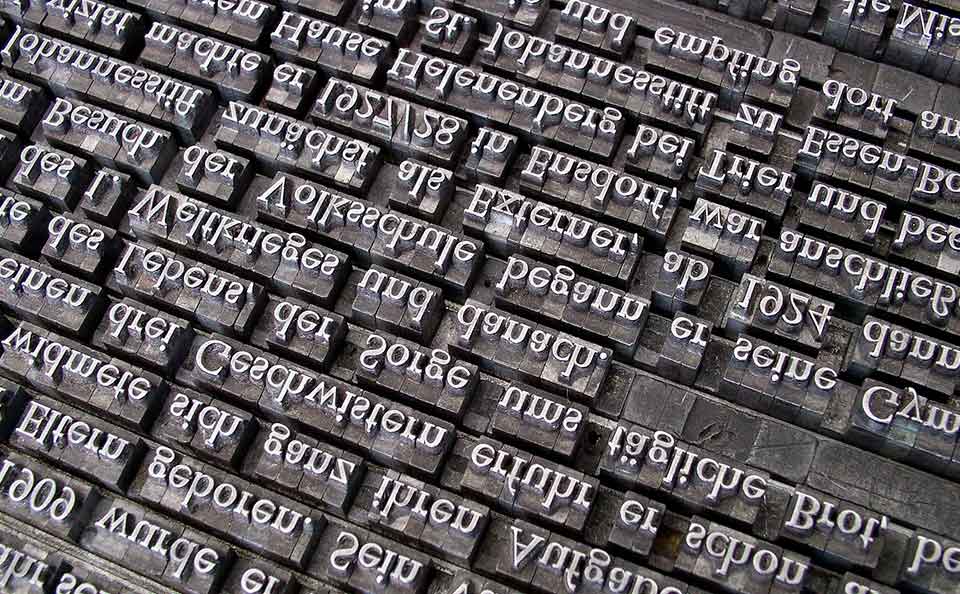 You tell yourself "Yes, I want to learn Spanish", "Yes, I'll learn French before my two-week trip to Paris" or "Yes, I'm finally going to become fluent in Czech".

It's at this point that you run into a problem.

You may have said yes to Japanese, or Italian, or Nepali, but that's not the only thing that you've given a yes to in your life.

In fact, there are a thousand and one other "yeses" that you've given that will compete with the "yes" you've given to your target language.

What does this mean?

Sometimes saying yes to something isn't good enough to ensure that thing will become a serious, lasting part of your life.

Sometimes you have to go further.

You need something stronger than "yes", to make sure your language learning really stands out from the rest of the things you could be spending your valuable time doing.

Not only that, but you need another word to help you remove some of the unnecessary things from your life; things that could rob your language learning of the time and space it needs to breathe and grow.

The Burden of Saying Yes 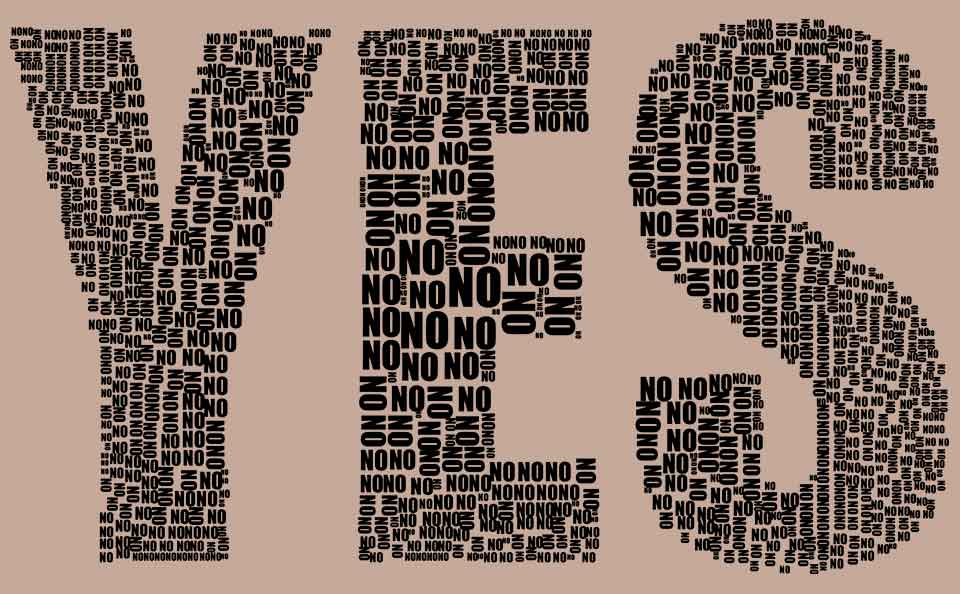 Whether or not you realize it, you say yes to a staggering amount of things in your day to day life.

There are things you have to say yes to, like your job, your family, your health, and your pets.

There are things you want to say yes to, like your friends, your favorite TV show, and that cool new video game that just came out.

And there are things you don't want to say yes to, but do anyway. Like responding to emails, watching ads on YouTube, or endlessly checking and re-checking your social media feeds.

Language learning, generally speaking, goes in the second category. You want to do it, but it has to fight for time among all of the first-category necessities and the third-category time stealers. And since it's something that isn't inherently easy, it loses out to all of the second-category things that are easier and feel more fun, at least in the moment.

So clearly, saying "yes" to language learning doesn't cut it. To succeed as a language learner, you need to carve out a new priority level that is only exceeded by the most important things in your life.

You need to learn to say "Hell yeah!" to language learning.

The Strange Power of "Hell Yeah!"

The weakness of the word "yes" was first pointed out by author Derek Sivers in his book Anything You Want.

As an entrepreneur, Sivers found that saying "yes" to too many things only led him to be "over-committed, or too scattered".

To combat this, he developed a system that dramatically reduced his commitments, and ensured that what he did commit himself to was of great importance to him personally.

What did he do?

He replaced "yes" with "HELL YEAH!"

And he said "no" to anything else.

In his own words:

'When deciding whether to do something, if you feel anything less than “Wow! That would be amazing! Absolutely! Hell yeah!” — then say “no.”

When you say no to most things, you leave room in your life to really throw yourself completely into that rare thing that makes you say “HELL YEAH!”' (source)

Let's take that idea, and apply it to your language learning.

Do You Say "Hell Yeah!" To Your Target Language?

So I've got a couple of questions for you. Questions you need to sit and seriously think about.

First, "Do you really want to learn a language?"

and second, "Do you really want to learn your current target language"?

For the purposes of this exercise, your answers to these questions can only be "Hell yeah!" or "no."

If your final answer isn't a "Hell yeah!" to both questions, you've got some work to do.

Either you stick to your "no", and do something else with your time, other than language learning, or you put in the work to change that "no" into a "hell yeah!"

Once you've found your "hell yeah", let's move on, and talk about our next key word: "no"

How "No" Gives You Freedom to Master a Language 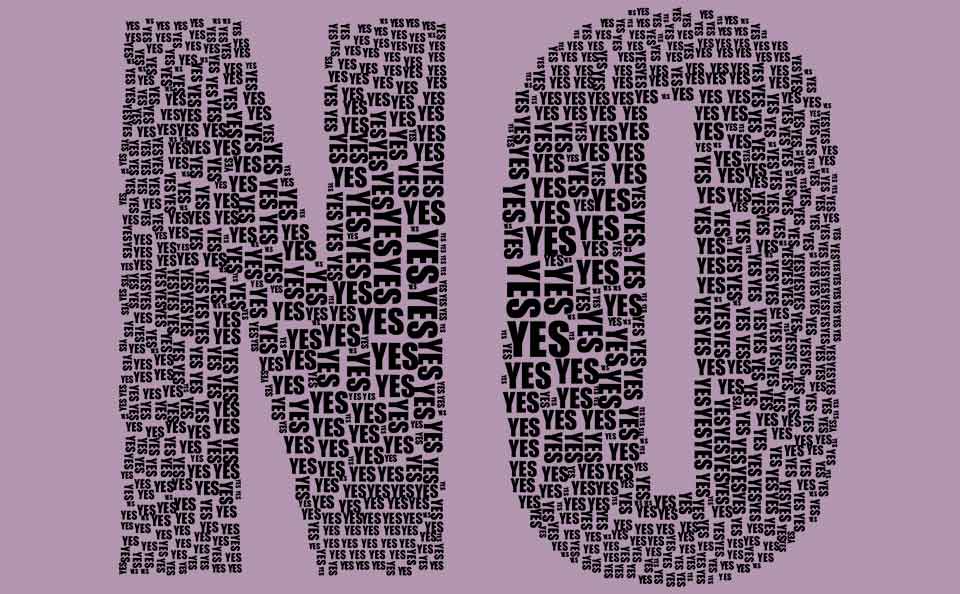 When you have your "hell yeah", and therefore know you're fully on board with learning your target language, the next weapon in your arsenal is small, but powerful:

"No" is the word that will protect your language learning from anything else that could stake a claim to its place of importance in your life.

Since you've decided that language learning is really important to you, you need to employ the word "no" liberally to carve out as much time for your language learning (and the other "hell yeahs" in your life) as possible. Or else they'll be jockeying for time with things that ultimately don't matter.

Author James Clear put it best when he wrote:

So, let's go back to the three categories of things you typically say yes to:

When Clear talks about "distractions", he's mostly talking about the third category, of things that take up your time without you wanting them to.

But he's also talking about the second category, too. Things that you want to do, but might not always find time for.

Clear calls this "upgrading your no" and further adds:

"You also need to learn to say no to opportunities that were previously good uses of time, so you can make space for great uses of time."

So, that's what I'd like you to do as a last step here. Learn to say no to the merely "good" stuff, so you can make space for language learning, which you and I both now agree is a “great” use of your time.

Take five minutes and make a list of all of the things that you want to say yes to in your free time.

When you're done, go down your list and ask yourself which (if any) of these items is a "hell yeah!", and therefore something you seriously want to keep in your life, alongside language learning.

Anything not labeled a "hell yeah!" will now be put firmly in the "no" category, and is something that you can gradually phase out of your life in favor of language learning.

Once that's done, your only remaining job is to actually drop those things from your schedule and use all of the newly-earned time to get down to some real, serious language learning.

Then, and only then, will you find that yes, you really do have time to learn a language, because you know in your heart that it's something that is of key importance in your life.