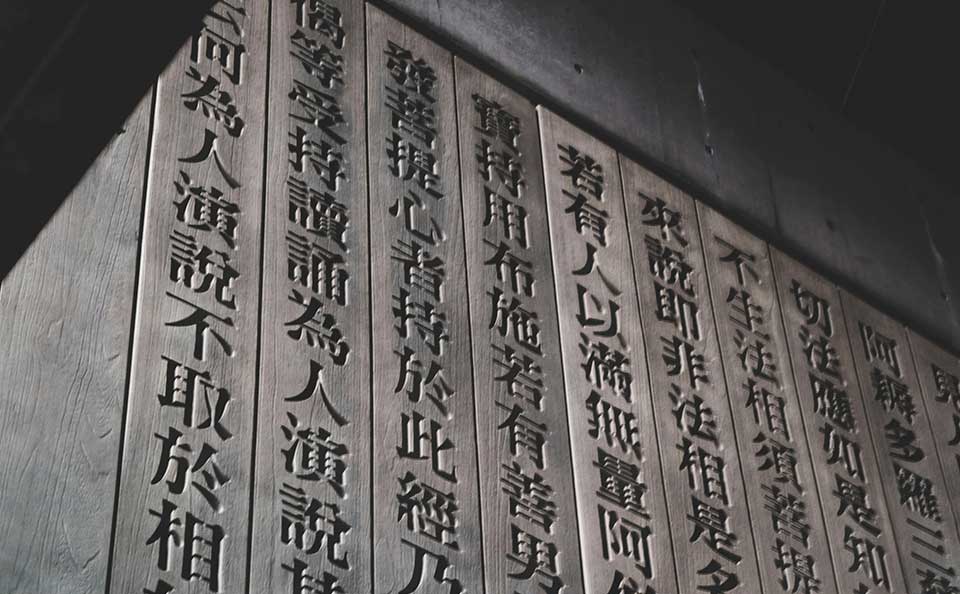 Since it is a language that does not have a strict phonetic alphabet, Chinese scares many students due to its particularly challenging writing system. Chinese characters (汉字hanzi or “Han characters”) are more properly known as logograms, where each symbol represents a morpheme (or a meaningful language unit), and are mainly used to write Chinese, and partly Japanese, and other languages. It is one of the longest writing systems known. The number of Chinese characters in the famous Kangxi dictionary (康熙字典 Zìdiǎn Kangxi, whose compilation was ordered by Emperor Kang Xi of the Qing Dynasty), is approximately 47,035. So, what makes Chinese characters so difficult?

First of all, we need to clarify what knowing a Chinese character means:

1) recognizing its meaning from its shape

3) knowing how to write it (stoke order)

In the case of the character 爱, for example, you need to recognize its meaning, i.e. “love”; know that  its pronunciation is ài with the 4th tone (descending tone), and finally, also know that this character consists of 9 strokes which should be written from top to bottom and from left to right.

The first barrier of Chinese is the total absence of any point of reference. A beginner student may come across the following sentence:

He wouldn’t be able to pronounce it, unless he has it in digital form or he uses a software to pinpoint how each character is pronounced, or he has a text with pinyin, a system for the phonetic notation and transliteration of Chinese into Latin characters (see here to also hear the sounds).

The classic question speakers or students of Chinese are asked is: “How many characters do you know?”

This is an issue that reflects a common idea – most often wrong – about Chinese learning, namely that the number of characters you know is representative of your actual knowledge of the language. Well, this is a false myth that must be debunked.

In any case, before talking about the writing system and analyzing its difficulties, we should first talk about the nature of the Chinese language. Chinese is considered an isolating language, i.e. a language that does not have neither inflections or declensions, with an almost nonexistent morphology. If we think about the morpheme as being the smallest unit that defines meaning, it is defined  in isolating languages that words cannot be broken down into smaller morphological units. More often than not, these languages are not expressed through word modifications (suffixes, endings, etc.), but according to the position words occupy in a sentence. Clearly, the fundamental brick of a language such as Chinese is actually represented by its single Chinese characters. This aspect is even more evident in classical Chinese, where every idea corresponds to a single syllable and, thus, to a single character, whereas modern Chinese tends to form compound words of two or three syllables.

A traditional way of approaching the study of Chinese characters hinges on the fact that they are considered stand-alone entities: one learns and memorizes them by repeatedly writing one after another. This rote-memorization is based on lists that order them by difficulty and/or frequency. This is the way various language courses and universities deal with Chinese characters. They are often considered separate from one another and out of context. This approaches misses the main goal of learning how to use a given language as a tool of communication. Thus, learning in this aforementioned way is not only of little use, but will also slow down the acquisition of the language itself.

I should also point out that deciding to learn how to write Chinese Characters by hand  through sheer rote-memorization is rather demanding and tiring, especially in the early stages of learning. In fact, this type of “kinaesthetic” activity might be useful for the retention of Characters (the brain connects the movement one makes to write them in order, tract by tract, with the overall form of the Character), but this systematic effort entails a huge load for our memory. One should, in fact, not only remember how to write each character (number of constituents, stroke order, etc..) but also its meaning, pronunciation, and tone.

What I propose here is a dynamic study of Chinese characters, which has turned out to be much more effective and much less pedantic than the academic approach. The study is articulated in (according to) the following phases:

In the so called Analysis phase one reads a text in the target language (L2), analyzes each part of it in detail (words, structures, etc), and then transfers it into their native language (L1). The key point, especially in the case of Chinese, is to always equip yourself with text that includes characters, pinyin and audio.  The main goal is to find yourself in the best conditions to understand what you are learning. In this regard, the advent of the Internet has completely revolutionized the study of languages. It is still, a “silent” revolution, in that the majority of the people haven’t figured out yet how to take advantage (make use) of this huge resource.

I’ll try to show you a part of this resource. If you find a text in Chinese characters on-line, there are very useful and valid tools  to not only convert the whole text into Latin letters (Pinyin) , but also show the meaning of every character or pair or trio of characters (if the word has 2 or even 3 syllables) through pop-ups. The whole text can be printed and accompanied by a glossary at the end! (Mandarinspot).

And there is more! If no audio is provided, you can also copy and paste the text and put it into the appropriate boxes for a speech synthesizer to read it for you. An example can be found here. And last, but not least, Google Translate  provides a rough translation of the text. The software works particularly well with languages that have a rather simple syntax such as Chinese

If you don’t have the text in its digital format, and you are working with a simple textbook which provides a translation into your native language, the procedure is pretty much the same: one has to read the text in Chinese (L2) and understand and analyze the overall meaning and its single parts by comparing the two languages.

It is very important to point out again that the ability to translate text, accompanied by explanations of words and grammar rules, is revolutionary, in that it allows the student to avoid the use of dictionaries. Looking up a word in a Chinese dictionary can be quite a long and painful experience. One should be able to extract the so-called “radical” from a character and then look it up on the basis of the number of its strokes.

In the synthesis phase, you read the text in your native tongue L1 and translate it back into the target language (L2). In the case of Chinese, it is recommended to work on the computer using a typing software. For Chinese, the easiest and most intuitive tool is undoubtedly Google Pinyin Google Pinyin. You could alternatively add the Chinese language bar in Windows (Control Panel> Regional Options language> tab “Languages”> “Details”> “add”).

This technology allows you to write directly in Chinese on a Word file by typing in Latin letters, that is, in pinyin. If you know how to pronounce characters, you can easily write Chinese text in a word processor. Carrying out this operation is very useful.  By doing so you not only continue to assimilate the pronunciation of characters (through numerous sessions of reading and listening) but it also helps you discern and recognize the right characters among the many that correspond to the homophones. The repletion of this effort allows the brain to form the link between the sounds (Pinyin) and forms associated to it (hanzi) in a less stressful and much more effective and natural way, than the out of context rote memorization done in more) traditional studies .

Once you have gotten hold of  these tools, you only need to set up a practice routine, a cyclic and dynamic way that allows you to address, session after session, a text in many ways . The steps (steps) in how to deal with a given text can be done as follows:

Session 4 – L1 translation (sentence by sentence, without looking at the translation available)

I strongly advise to ignore Chinese characters during the first 3-4 months of study, focusing exclusively on phonetic writing (pinyin). The primary objective in the beginning, is to first learn the sound of a word (and also its meaning), and only later the character, or characters associated with it.

Thus, in the first months, you will only write back the translation in pinyin, without using Google pinyin. You can simply indicate the tones with a number (ex: 我是意大利人: wo3 shi4 yi4da4li4 ren2).. Once you become familiar with pinyin, you can make the next step and use Google pinyin and write the real characters. At this point, you can look back and check out the old texts by looking at characters this time, and translating them with Google Pinyin.

On a final note, if  you need to perfect your handwriting in Chinese (for exams at university or other reasons), you can add two more steps to the above schedule:

Session 4 – L1 translation (sentence by sentence, without looking at the translation available)

Session 7 – copy the text into characters by hand

Session 8 – write the text characters from a version in pinyin

Finally, if you need to know the stroke order of a certain character, you can use Arch Solo Travel , which provides stunning animations on how to write it, as well as inform you on a variety of information about it (compound words, phrases containing it, etc..).

The number of characters to remember remains high, but the Chinese writing system is quite rational, and once  you have figured out the way the single components are assembled together, the acquisition of characters becomes easier and faster. It is just a matter of practice, having the right tools,  and motivation..and the rest will come.

Stay tuned for the next post: tips on how to learn tones the right way from the very beginning